Last weekend our family had the opportunity to attend the Great Homeschool Convention in Fort Worth, Texas.  The last time we attended something similar was many years ago, very early in our homeschooling journey.  That convention had been put on by a different organization and I had been so overwhelmed by what seemed like miles and miles of tables filled with homeschool curriculum that I left not sure if I should cry or throw up.  I decided never to go back to a homeschool convention ever, ever again. 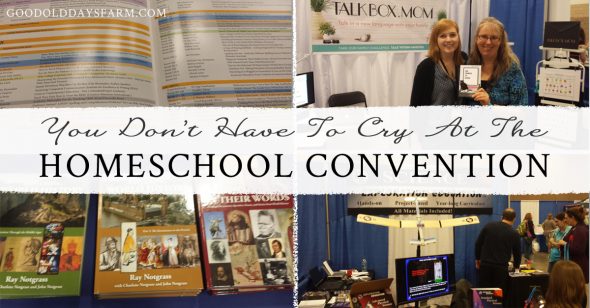 That was 8 years ago and I have faithfully avoided homeschool conventions like the plague ever since.  But last fall Great Homeschool Conventions wanted to become a site sponsor for the Good Old Days Farm blog.  I agreed and as I was writing up the email, sharing with you what their conferences offer I got really excited about what I was seeing and decided that I wanted to go, too!  Off we went… and the convention was every bit as wonderful as I had been expecting!  Our family had a wonderful time!  We had fun, we learned a lot, and even though the convention was huge, we didn’t come away feeling overwhelmed at all.  There were some strategic things that I did so that I wouldn’t have the same “I’m-going-to-ruin-my-children-forever-if-I-don’t-buy-all-this-stuff” experience that I’d had at the previous conference.  In this post I will share those tips with you.

Tip #1:  Give Yourself Permission to Miss Things

One peek at the Convention Schedule and I quickly realized there was no possible way to see everything.  Here is a picture of a half day’s schedule:  There were about 20 different workshops going on at any given time for the entire two and a half days! 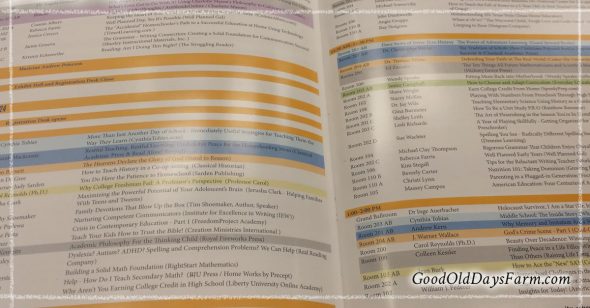 So Papa the Farmer and I went through the list and we each picked the sessions that were most interesting to us.  We each had a couple “I-must-attend-this-class” picked out and really tried to make those ones a priority.  When I was choosing which workshops to attend I looked closely at who was presenting it.  If it was being presented by a particular curriculum and the title sounded like it might be a show-and-tell for the curriculum, I didn’t go.  There were booths in the exhibition hall where I could take a closer look at the curriculum for myself.

For the most part, Papa the Farmer and I used the “divide and conquer” method to learn as much as we could.  Between the two of us, here’s what we ended up attending:

And here are some of the Keynote Presenters we were able to hear: 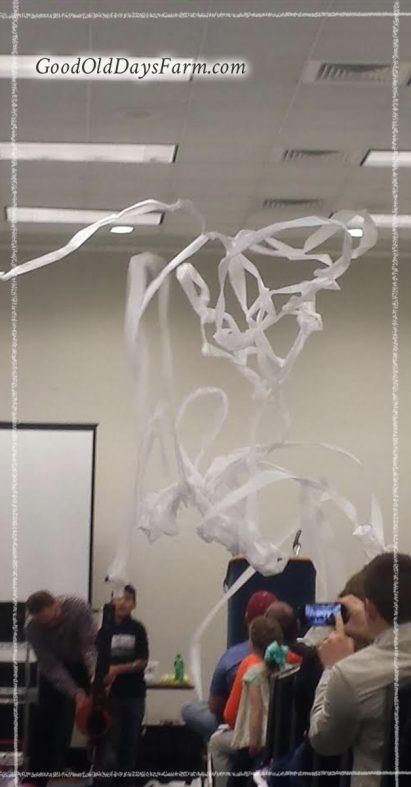 We didn’t even attend a session during every available time slot.  By giving ourselves permission to miss some things we were able to focus on what we most wanted to hear and still have time to relax, wander the exhibit hall and have picnic meals with our children.

Tip #2:  Skip the Commute, Sleep Nearby

We only live about an hour away from the convention, but when we looked at the schedule we decided that driving back and forth during rush hour was going to be really hard for everybody.  We wouldn’t be getting home until 11 pm or midnight and then we’d have to be out the door again by 6 am to get to the convention in time.  Instead, we decided to stay at a local motel. 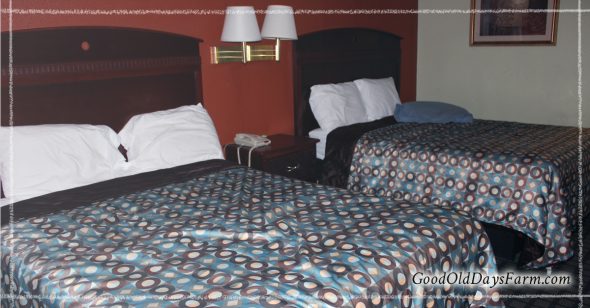 (As an aside:  Great Homeschool Conventions works with some nearby hotels to get a good rate for convention attendees, but we choose to stay somewhere less expensive.  After all, we just needed a clean place to sleep since we weren’t going to be there during the day.  We ended up sleeping at America’s Best Value Inn.  We have stayed with them in the past and have always had a very good experience.  It’s my go-to motel when we are traveling.  In my opinion, they really are America’s best value!)  We paid $55+tax for a large room with two queen size beds.  It included wi-fi and a really nice breakfast for everyone the next morning.  Usually motel breakfasts are something I think are worth avoiding but America’s Best Value serves bananas, apples, juice, cold cereal, muffins, bagels, scrambled eggs, biscuits and gravy, and my personal favorite…. there’s a place to cook your own waffles!  I have always found them to be a great place to stay when we’re traveling as a family.) 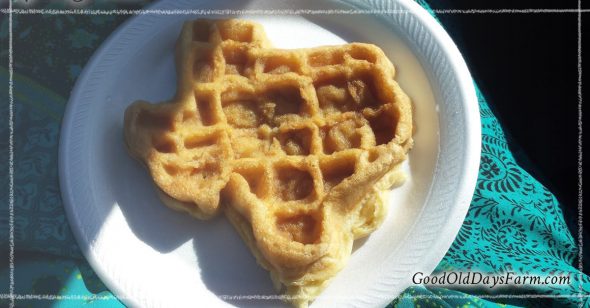 A homeschool convention is NOT the place to impulse shop.  Pretty much everything looks amazing.  If you can have an idea of what you are going to buy before you arrive, that is great!  If not, at least know how much money you can spend.  Wandering through the exhibit hall, I made a wish list that came to a few hundred dollars.  My children made a wish list that came to $1,000.  (I’m not even kidding… although I was pretty proud of all their choices!)  So wander through the exhibit hall, make a list of what you like, then decide what you will buy at the convention now and what can wait until later.

Tip #4:  Attend With A Plan and Plan Time to Shop!

In Tip #1 I mentioned that we planned out which workshops we wanted to attend.  When we decided to focus on what we wanted to do most, I realized that what I most wanted to do was wander the exhibit hall and look at all the goodies.  I actually went through the exhibit hall twice.  The first time, I sent the children into a workshop with Papa the Farmer and just looked around by myself (Ahh… the sheer bliss!)  I found a lot of curriculum I already knew about (or am using), I found things I had seen before but didn’t know very much about and I found some really neat items that are brand new! 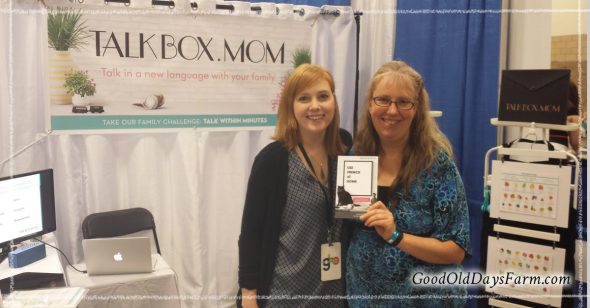 This is me with my new friend Adelaide from TalkBox.Mom.  (Ok, I DID pre-order her brand new product on impulse but it’s so cool I have no regrets!)  =)  I’ll tell you more about her later this week.

The second time I went through the exhibit hall I brought my children with me and let them lead.  It was very interesting to see what they were attracted to and what items they put on their dream list and gave me some insight into what kind of things they would like incorporated into their education.

Tip #5:  Don’t Expect to Meet Up With Friends

On the first day of the conference I got a text saying, “Hey, are you at the Conference?  I could have sworn I just saw your husband!”  It was a friend I hadn’t seen in a while and I suggested we meet up the next day.  Big mistake!  The conference was so busy, with so much to do, we just didn’t have time to meet up for a visit.  I will have to get together with that friend another time. 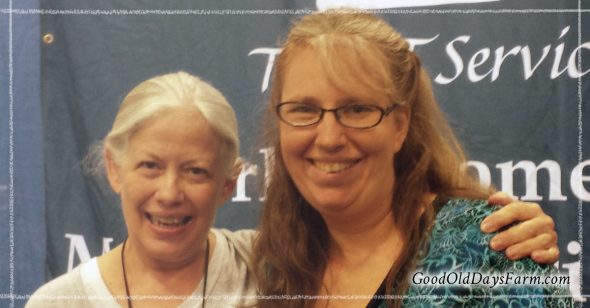 One lady I DID have a chance to meet is Deborah Burns from MedTranscription.com!  Deborah has been a long-time sponsor of GoodOldDaysFarm but we have never met in person.  When I saw her name on the list of speakers a couple of weeks before the conference I emailed her and said, “Hey!  Let’s get together!”  I severely underestimated how busy we both would be!  Between workshops, navigating the exhibit hall and having to backtrack and take my children potty several times (!!!) it took me a couple of hours to make it all the way to her booth and when I got there it was hopping with people wanting to know more about her Medical Transcription agency.  But we got to visit a little bit and she is such a delightful lady!  She is one of my new favorite people. 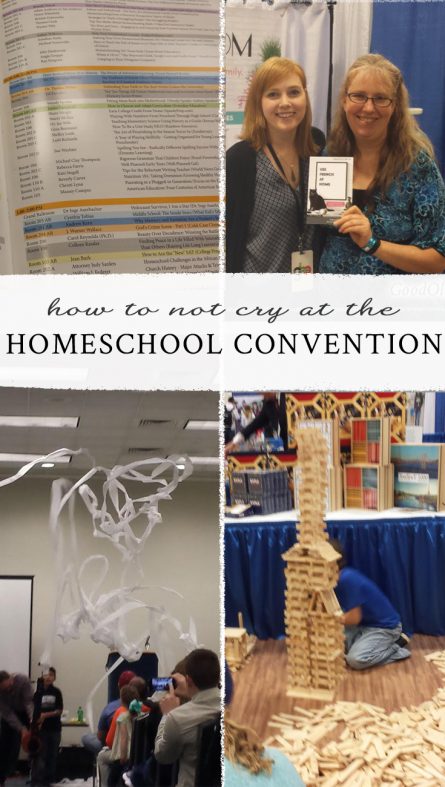 Overall, I found that attending a Homeschool Convention as a seasoned homeschool mom was so much easier than attending as a newbie had been.  At this point in my homeschooling career I know what does and doesn’t work for our family.  I’m willing to try new things but I also know my limit so I don’t take on so much that it overwhelms me.  The strategies I used above helped me really relax and enjoy this homeschool convention.  Also, Great Homeschool Conventions did a really fabulous job putting together a program that covered so many topics and assembling a wide variety of vendors.

What about you?  Do you have advice for someone heading to a Homeschool Convention soon?  Tell me in the comments!