I saw something yesterday afternoon that has me so, so excited!  Last year (back in the days when my mother might have been the only one to read this blog!) Papa the Farmer and one of the Little Farmhands put a peppermint patch in for me down by the front gate. (Isn’t my Little Farmhand cute working so hard like his Papa?)  This was one of our first projects after we decided to open a farm. 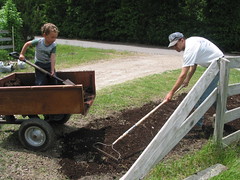 Now, I need to tell you… I have never gotten a plant to live.  That’s one of the reasons why this whole farming idea is so crazy.  For example, I was a student teacher in a kindergarten class one time and I was in charge of helping the children to sprout bean seeds in cups to take home for Mother’s Day.  I sprouted 10 extra seeds so that just in case some of the children’s beans didn’t sprout, there would be extras.  Well, all the beans sprouted except 10.  My 10.  I don’t know why mine didn’t sprout because I did all the same things to my beans that the kindergarteners did to their beans, but mine never grew.  All I can say is that it’s a really good thing my Mom wasn’t counting on getting a bean plant for Mother’s Day that year…

But I had grand dreams for this peppermint patch.  After all, peppermint spreads like wildfire.  People who plant peppermint complain that it’s taking over and they can’t kill it if they want to!  So peppermint sounded like a really good idea.  I envisioned a big, luscious bed of peppermint on each side of our gate that would smell wonderful… that I could use to dry and make tea… that the neighbors could come and help themselves to if they wanted some.  And all this, with minimal effort on my part!

Actually, the peppermint patch went pretty well… until I got involved.  Several weeks (ok, maybe it was months!) went by and weeds were growing.  It occurred to me that somebody had better weed that garden right there down by the road and since it’s technically my peppermint patch, the responsibility fell to me.

Now you have to understand.  This is TEXAS.  It gets really, really, hot here.  If you have never experienced a Texas summer, imagine yourself in a sauna, then turn the heat up a few degrees and lock the door so that you can’t escape and that gives you a pretty good idea of what Texas in July is like!  There was no way I was going to weed that peppermint patch in 108 degree weather, so I went down in the evenings when it got a bit cooler (You know, like, 100 degrees or so) and decided to weed then.  For four nights in a row I would weed until it got too dark to see any longer.

On the fifth morning, Papa the Farmer said to me, “I was just looking at the peppermint patch.  I see you’ve been working hard, but I was just wondering… why did you pull all the peppermint out and leave the weeds?”

After spending hours working in the heat, I just knew I couldn’t have done what he was suggesting.  But when I went down to inspect… sure enough… the peppermint was sitting in the compost and I had a collection of carefully preserved weeds growing at my gate.  In my defense, the weed in question did look amazingly like peppermint… especially in the dark.  So that was the end of my peppermint adventure.  I gave up on that project.

But yesterday I noticed, it has decided to forgive me!  Look at these little baby leaves, coming back!

So there, world!  Maybe I do have potential to be a farmer’s wife after all!

Please pray for our family today as we say "Goodby